1. The Enzymatic Mechanism of Oxalate Decarboxylase.

1. The Enzymatic Mechanism of Oxalate Decarboxylase. Oxalic acid is the simplest dicarboxylic acid but also the most common in our environment. It is produced by plants and is the most common naturally occuring toxin in our diet. It is particularly common in big-leaf edible plants such as rhubarb, chard, beet, and spinach. Our kidneys have to flush out excess oxalate and if we ingest too much we end up with kidney stones or even worse consequences. Oxalate decarboxylase (OxDC) is one of only three known enzymes that degrade oxalic acid. It is common in soil bacteria and fungi and plays an important role in the biogeochemical carbon cycle. OxDC breaks down oxalate by a redox-neutral uni-molecular disproportionation reaction according to the following chemical reaction: HC2O4 (aq) → CO2 + HCO2 (aq) The reaction mechanism is still poorly understood. We utilize electron paramagnetic resonance (EPR) to study the manganese ions contained in the enzyme and follow their redox states under reaction turnover conditions. We also test for free radicals produced in this reaction. Enzymatic assays, X-ray crystallography, mass spectrometry combined with site-directed mutagenesis of the protein are further approaches we take to this problem. Our research has contributed the following important results to the knowledge about OxDC: (1) During turnover the protein generates the superoxide free radical, O2−∙. (2) The presence of Mn(III) was observed by EPR spectroscopy and its pH dependence matches that of the enzyme activity suggesting that Mn(III) drives the catalytic process (see figure). (3) We were able to obtain the first crystal structure of OxDC at low pH in the active state. This has led us to propose a new model for substrate binding.

Figure 1: (A) pH titration of OxDC. The sextet signal between 600 and 900 G corresponds to Mn(III) while the signals between 1100 and 1700 G correspond to Mn(II). (B) relative concentration of Mn(III) based on its EPR intensity. Mn(III) has maximum intensity at pH4 while there is none detectable at pH8. This correlates strongly with the pH dependence of the enzyme activity which also peaks at pH4 and is absent at pH8.

Innovation and scientific breakthroughs often occur when a new technology is introduced in a field and can be applied to answer an important question. The development of microfabrication techniques over the past two decades promises such an advancement in the area of EPR. EPR is a well established technique that has been used in many areas of science (physics, chemistry, materials science, biomedical sciences, etc.) with great success but it has not yet been “married” with microfabrication (of resonant circuits) and microfluidics (for sample control). Despite the potential for new scientific breakthroughs only very few publications have appeared in the literature that explore the synergy of these techniques. For example, miniaturization of the EPR resonant structures to volumes of the order of 10-3 mm3 coupled with microfluidic delivery systems should in principle allow the detection of free radicals in living mammalian cells in situ. Such a device would have many exciting applications in biology and medicine, e.g., the study of free radical metabolism in response to external stimuli such as toxins, potential drugs, or in pathology vs. normal cells. We are collaborating with Dr. Jens Anders from the Universität Stuttgart in Germany and with Dr. Giovanni Boero from the EPFL Lausanne on the development of novel microscopic EPR detectors integrated on semiconductor CMOS chips (see fig. 2). 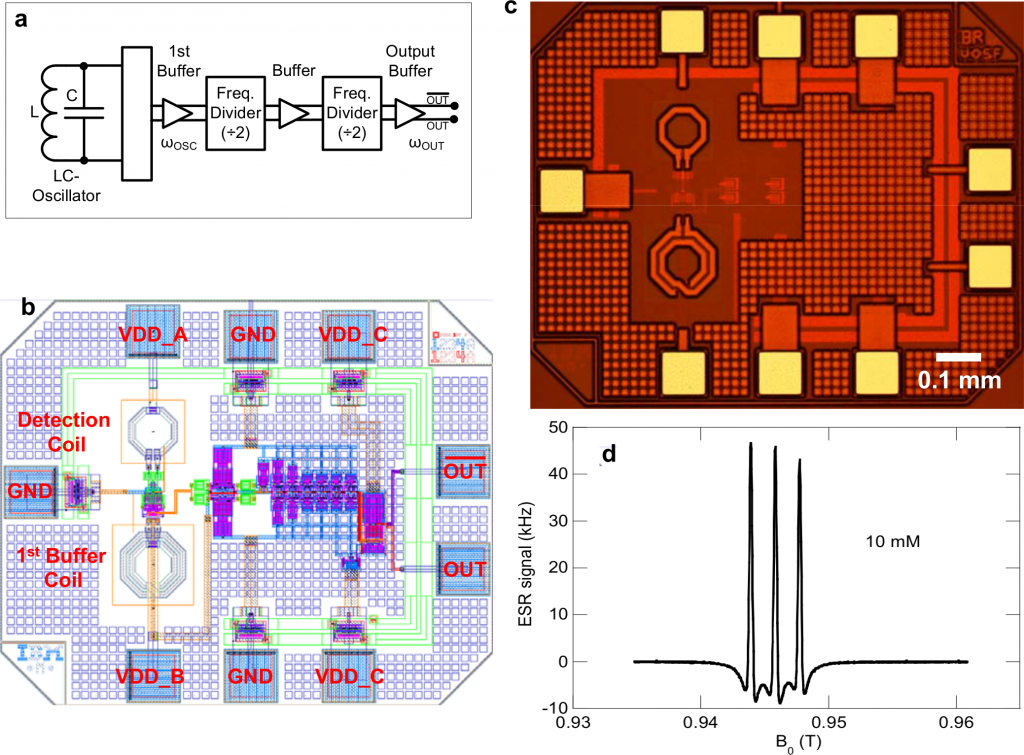 Figure 2: (a) Block diagram of the EPR chip, (b) electrical layout, (c) picture of the integrated EPR detector, and (d) EPR spectrum of a 10 mM solution of TEMPOL nitroxide in water.